Winner of the Idea Competition 2016

Prof. Kamal Mustafa and his research team from the Department of Clinical Dentistry were awarded the prize by BTO and Sparebanken Vest.

The prize was awarded during the Idea Competition 2016, hosted by Bergen Teknologioverføring (BTO) and Sparebanken Vest. The Idea Competition has been hosted since 2010, and the award of 300.000 NOK will help developing the idea further. The purpose of the competition is to stimulate commercialization of research results, to enlighten the research and commercializing environment, and to generate attention for the need of innovation and research.

This year’s prize was awarded by the Norwegian Minister of Trade and Industry, Monica Mæland, at Bergen Chamber of Commerce and Industry’s annual conference, Friday 18th of November. The jury stated the reason for Professor Mustafa and his team winning the competition as follows:

“For this year’s competition we received 15 particularly good and interesting contributions. The contributions were innovative, and if they succeed they will benefit the society in a great way. The jury picked a candidate from an academic environment that is in lead of their research field. The field of reconstructing human bones is rapidly developing and has a huge clinical potential.” 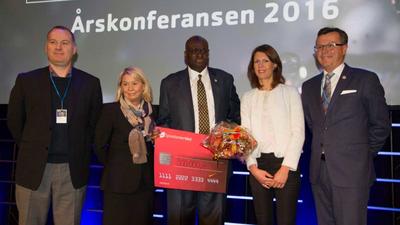